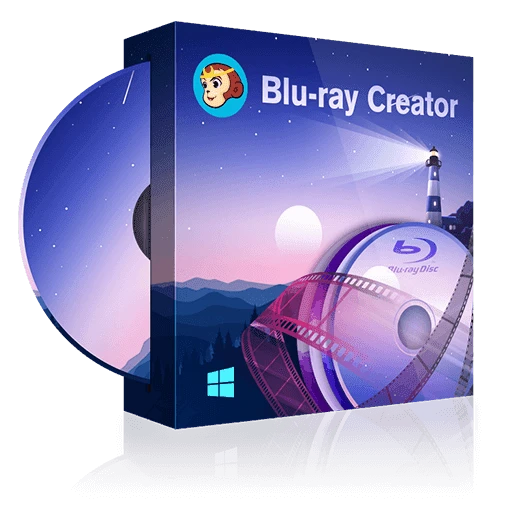 Features:-
Create Blu-ray from any video format
As the best Blu-ray burner software, DVDFab Blu-ray Creator can create video Blu-ray from 200+ video formats including AVI, MP4, MKV, MOV, FLV, WMV, M4V, MPEG, etc. You can do all of them Burn videos from HD camcorders, smartphones, SD cards, and other devices to standard Blu-rays for playback on any standalone home player as Blu-ray.
Burn Video Blu-ray to blank Blu-ray discs or save as ISO/folder
This DVDFab Blu-ray burner gives you complete freedom when creating video Blu-rays, whether you want to burn your homemade videos to a blank Blu-ray disc or save them as an ISO image or folder on the hard drive for storage and playback later. This Blu-ray burner can output various Blu-ray formats such as BD-50, BD-25, and AVCHD-DVDs (BD-5 and BD-9), which can be played on any standalone home player.
Show metadata information of films / TV series in the Blu-ray menu
Based on the built-in Meta Info function, the DVDFab Blu-ray Creator can automatically synchronize the metadata information of the source films or TV series, including image, poster, cast, rating, genre, and when burning Blu-ray videos to Blu-rays Description. Finally, all of the metadata info is clearly displayed in the newly created Blu-ray menu, giving you the feeling of viewing real Blu-rays on the media server. Experience a 100% immersive viewing experience with this Blu-ray menu creation freeware!
Create video Blu-ray with free custom menu templates
Menu navigation is the key to Blu-ray creation and an enjoyable playback experience. The DVDFab Blu-ray Creator has several sets of static and dynamic menu templates to make your homemade Blu-rays stylish, professional, and suitable for the cinema. The built-in menu library with modern templates is regularly updated in this Blu-ray burner to suit your personal preferences.
Customize the Blu-ray Creator menu templates according to personal preferences
In contrast to normal Blu-ray creation freeware, this DVDFab Blu-ray Maker offers very intuitively, considerate, and customizable menu templates. Before the Blu-ray burn, you can personalize all elements and widgets within the templates, including the background images, the thumbnails, the text font, color, and size as well as the playback buttons such as play/pause and previous/next.
20x faster conversion speed when creating Blu-ray with GPU acceleration
What sets the DVDFab Blu-ray Creator apart from the crowd is the ability to burn multiple videos of different formats to a Blu-ray at the same time and arrange their playback order as you wish. Feel free to create Blu-ray videos and watch the videos in real-time in the preview window to check whether the end results in this Blu-ray burner meet your expectations.
Create user-friendly .nfo files for Media Server
It is a great pleasure to watch Blu-ray movies or TV series on your home theater system after creating Video Blu-ray. What if the metadata information of your self-made films or TV shows were displayed? You are lucky! The DVDFab Blu-ray Creator can generate a .nfo file by default when creating a video Blu-ray, so that all meta-information is completely displayed on a media server such as Plex and DVDFab Player 6, which creates a viewing experience almost like being in the cinema.
The process to get the giveaway license:-
Visit the Links – DVDFab Blu-ray Creator giveaway page 1 DVDFab Blu-ray Creator giveaway page 2
The webpage is in the German language so use Google translates or Google Chrome to view the page in English. Enter your email address and click on send.
You will receive an email containing an Authorized email & Password to activate your software.
Software:-
Download Link – DVDFab Blu-ray Creator For Windows
Note:- You get a License for 1 Year i.e valid until February 28, 2023.
Enjoy…