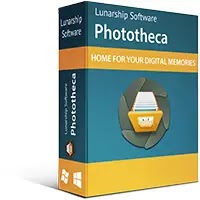 Phototheca makes it easy to view, sort, organize, edit, and share thousands of digital photos and videos on PC.
Import photos from various sources: drives, NAS, network shares, memory cards, and smartphones. Remove duplicates, tag photos with keywords, recognize and tag faces, arrange photos into albums, edit and share to Web.
Phototheca is photo editing software and has a rich tool-set of tools to improve photos and bring them to life with a new stunning look.
Features:-
Import from local drives, USB sticks, cameras, and cell phones. Files on local drives are not moved or copied during the import, so no space is wasted and files remain unchanged.
Import from memory cards. Phototheca knows photos that were imported earlier and don’t copy them again — so no duplicates appear on your drive.
Import from network shares. There is an option to choose whether or not you want to copy or files from network shares. Your home NAS is supported also.
Import from iOS devices. Native import from iOS devices like iPhones and iPads is available. Previously imported files will not be copied again.
Phototheca supports multiple RAW camera formats using the advantages of the Windows Imaging Component. More details are available by the link: RAW in Phototheca
Phototheca supports multiple video formats, allows us to tag videos with keywords and write descriptions. There are a lot of video formats available to use, including Avi, Divx, Flv, h264, MOV, mp4, Mpeg, SWF, WMV, Xvid, and others.
An auto-update for previously imported files is available. If Phototheca detects changes in imported files — changes appear inside the application automatically, in a seamless way.
Phototheca remembers and constantly tracks all locations with imported photos. When new photos appear in those locations — they can be imported automatically.
Software:-
Download – Link
Install and activate it with the license key provided in the zip.
Enjoy…