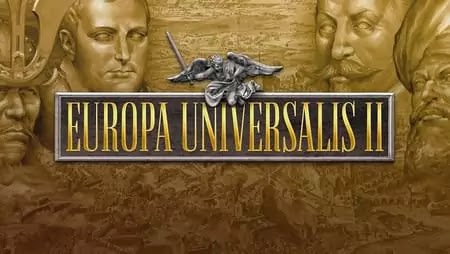 Europa Universalis II invites you to a global struggle for supremacy from the dark times of Jeanne D’Arc to the flaming wars of Napoleon. As the leader of a country, you have to guide domestic and foreign policies. Engage in religious struggles, set up expeditions to claim the New World, lead your country to prosperity and victory. Send your Privateers to roam the seven seas, muster mercenaries to bolster your defenses, and send missionaries to convert infidels to your State Religion.

Interact with true historical events and persons to determine which path your nation will take in the game. The new game includes an elaborate and expanded system for diplomacy, trade, military might, and development. It also includes new graphics, music, sound, manual, and a new tutorial system to lower the learning curve.
The possibility to demand or offer any combination of provinces, gold, and diplomatic agreements as a result of peace.
Europa Universalis II expands history’s greatest cause of war “Religion”, introducing Hinduism, Confucianism, and Buddhism. Cultural groups based on linguistic differences between peoples have also been introduced to portrait the difficulty with which one controls the subjects of another culture during different time periods.
A brand new event engine that produces historical, random, and special events. The event engine is designed to let the player create his own events making it very fun to build scenarios. Many of the events have multiple choices.
System requirements:-
Minimum system requirements:
System:Windows XP / Vista/ 7 / 8 / 10
Processor:1.8 GHz
Memory:1 GB RAM
Graphics:3D graphics card compatible with DirectX 9.0c
The process to get the giveaway:-
Visit the Link
Click on “Go to giveaway”.
Click on “get it free”.
If you already have an account in GoG.Com then just sign in and claim the game else you have to create an account first.
You will get an email about your purchase.
Enjoy…